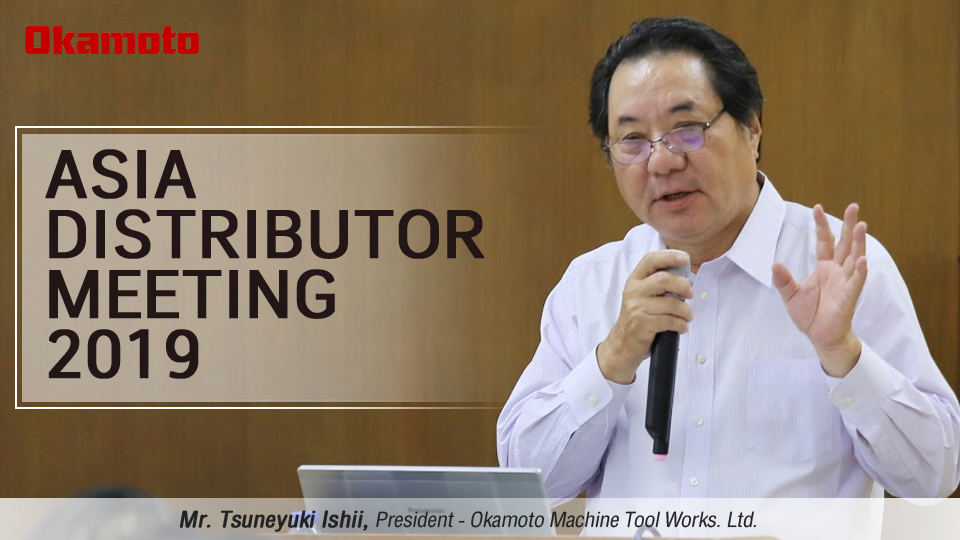 On July 4, 2019, Okamoto (Thailand), Co. Ltd. arranged the Asia Distributor Meeting 2019 at Okamoto (Thailand) plant in Ayutthaya, in which Mr. Tsuneyuki Ishii, the president of Okamoto Machine Tool Works, Japan opened the meeting and shared the world’s market situation. In addition, the chief executive team from Japan also shared interesting information to the  64 persons with 20 distributors from 10 countries in Asia region.

Mr. Tsuneyuki Ishii revealed the summary of the financial results for the fiscal year 2018 that Okamoto has a very impressive overall performance. Both sales figures and actual profits exceed the goals, especially the performance in China and in the United States have generated substantial sales for the company. The fast-growing segment is the semiconductor while the gear and the casting are affected by the China-U.S. trade war and therefore cannot make sales as set. However, the grinding machine has made numbers a little above the goal.

Okamoto Machine Tools Work plans to expand its business in China and the United States, as a part of the 3-year medium-term plan (2020-2022). It plans to open a new production base in China, which will be responsible for the assembly process. For the sales side, open 2 sales offices in China, and a sales office in Connecticut in the United States. 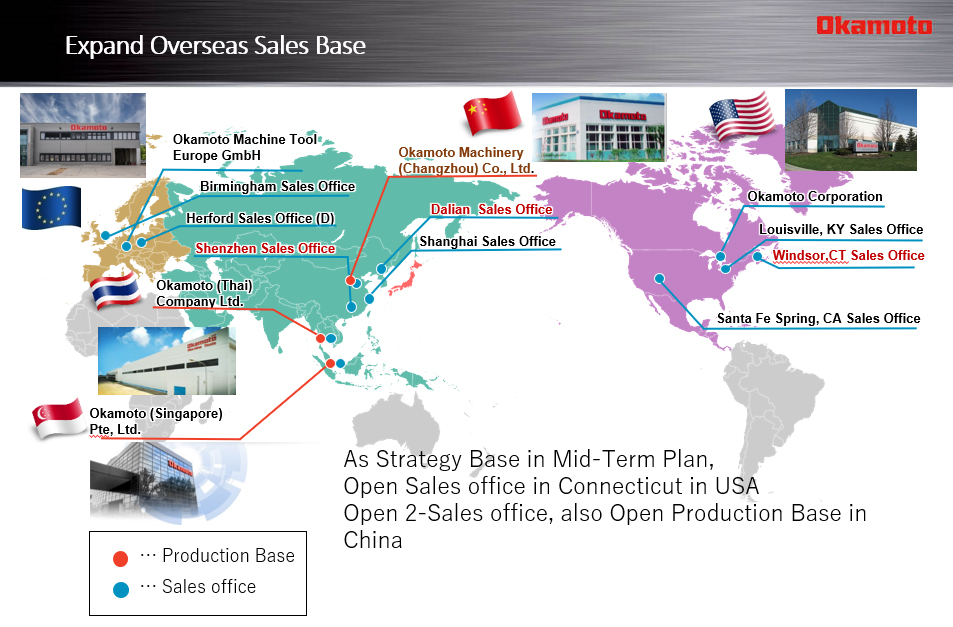 In addition, the company also plans to launch new products in the grinding machine, including 8 models as follows.
As a goal of the mid-term business plan between 2020-2022, Okamoto aims to have 5% sales growth and 10-12% profit margin. It is estimated that, by 2022, the total sales will be 3.8 billion yen and the profit will be 46 billion yen. While the sales of grinding machine is expected to continue to grow, the sales in the semiconductor may slightly decline.
Forecast by the region, the sales growth in China will be 43% while, over the same period, the accumulated growth in southeast Asia (except Thailand) will increase by 38% whereas the growth in Thailand is expected to be only 2%.
The strategy that will bring Okamoto to achieve the goal in the medium-term business plan focuses on securing the stable profit. It consists of 3 main strategies:
1. Strong for downside and stable profit base.
2. Training of key business for continuous growth.
3. Re-building for Okamoto’s brand to become a high-tech machine brand.
The main strategies above will define the operational plan in 3 areas:
● Reinforcement customer’s lifetime values
Enhance the value of Okamoto to customer forever uses of service by changing from "B to B" to "B with B" which is not just selling but building relationships and working with customers to help them succeed as well.
● Global Front Expansion
Promote sales to be more effective by promoting various products including machinery and equipment in order to reach customers in each region around the globe.
● Manufacturing Reform
Production reform to increase the efficiency and quality of the entire process. This results in quality products, machinery, equipment, and parts, quick delivery to customers, and as less errors and damages that may occur in the process as possible. 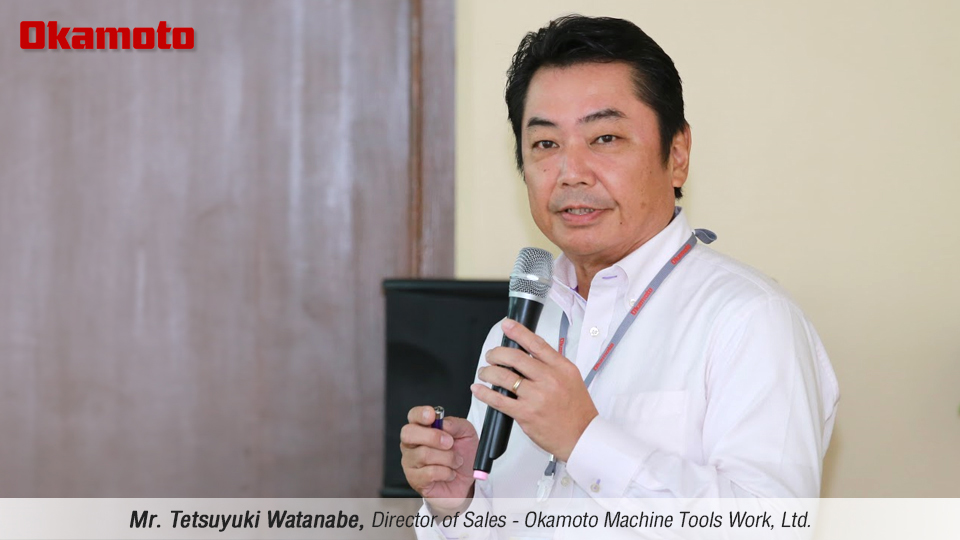 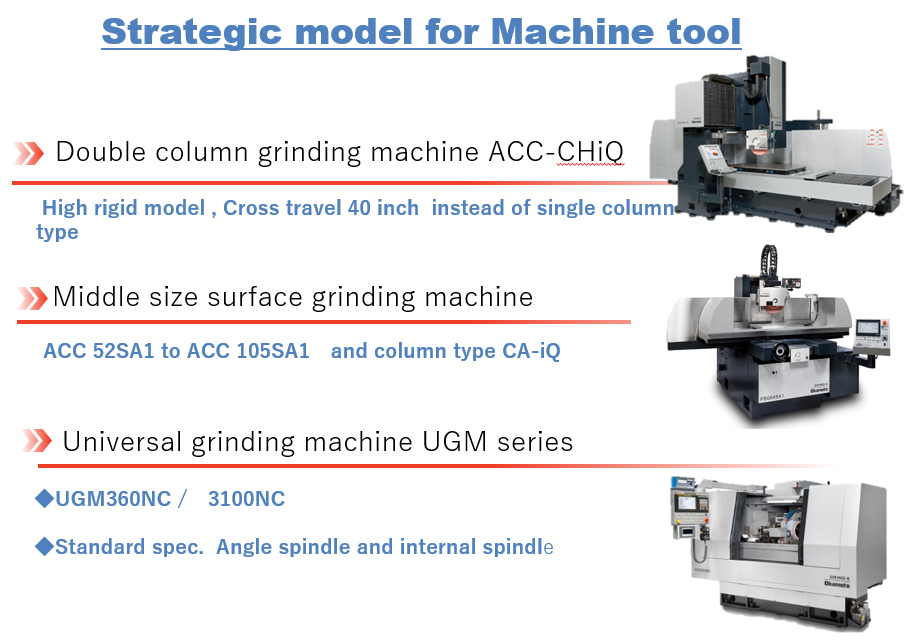 The launch of all 3 flagship machines has been well received. They have already been delivered to customers, for example, the ACC-CHiQ hydrostatic slideway and linear motor model has been delivered to many Japanese machine tool manufacturers such as High Accuracy Machining Center, CNC Lathe manufacturers over 20 customers and start to deliver oversea machine tool manufacturers. This really testifies to the potential of the flagship products that Okamoto is targeting. 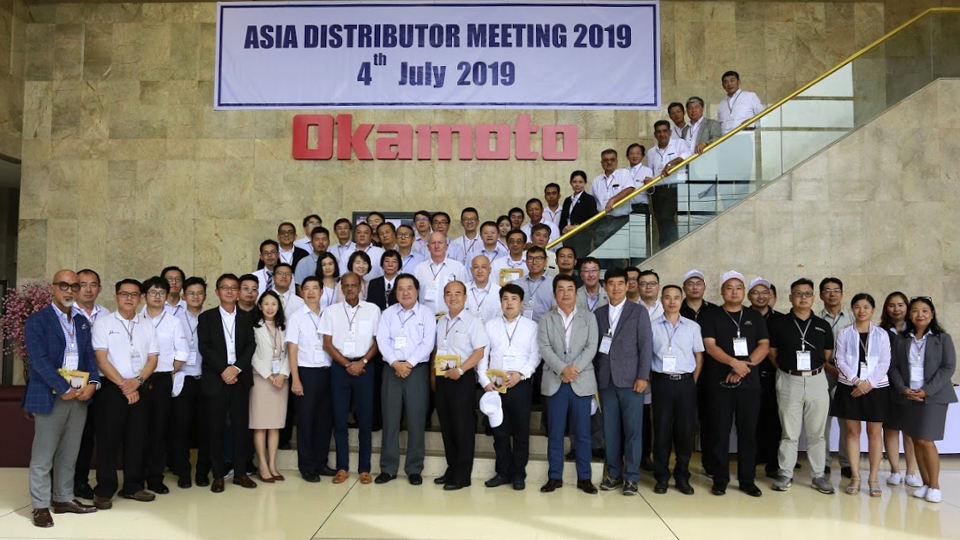 About to the Company